We sent a team of journalists and experts out to talk to Open Call project owners about their grant project. We used their findings for internal evaluation, the start of an external impact analysis, and an article series about the lessons learned. This article is the sixth in that series.

Circular Flanders’ Open Call supports experimental projects related to circular economy. We’ve launched the Open Call for the third time, and are supporting around 200 projects, the support totalling 16 million euro. The projects are diverse: from civilian initiatives, through business projects, all the way up to local government innovation projects. ‘Well that’s all very well,’ you might think, ‘but what’s the result?’ In order to answer that question, we let loose a team of journalists and experts to talk to project owners about their subsidized projects. We used their findings for an internal evaluation, the start of an external impact analysis, as well as a blog series about lessons learned. This is the sixth in this series.

No words, but actions. Ever since Corporate Social Responsibility was introduced in the corporate world around fifteen years ago, it became inevitable. Companies who don’t comply with the CSR guidelines, voluntarily take societal, ethical, and environmental challenges into account within their activities.

CSR is moving up: according to business magazine Forbes, the Gen Zers (born after 1995) prioritise sustainability. They look for flexibility in the workplace, more freedom of choice, and more tolerance and transparency on the work floor and on the market. They are especially interested in companies with sustainability goals, such as fighting poverty, climate change, and human rights.

Forbes estimates that the Gen Zers will make up 40 percent of all consumers worldwide, and they want to see something different, and ethical.

According to the CSR Monitor 2018, which polled 640 Belgian firms about their approach and vision about sustainable entrepreneurship, three quarters of Belgian firms believe that taking up societal responsibility (so, CSR) pays off in the long run. The Monitor also shows that CSR can motivate employees, attract talent, convince clients and even save costs. Plenty of CEOs and managers see CSR as the way forward in an ever-changing world. They build, or want to build, their business in a sustainable way, from conviction, just like the Gen Zers.

Circular economy is aimed at sustainable business building within the limits of our planet, and is therefore indispensable for CSR. Social impact can’t be unlinked from circular economy either, social circular economy for example is an important leading edge.

Sustainable entrepreneurship is mostly popular with the younger generations, that’s clear from the testimonials from participants in the Open Call. Architect Nicolas Coeckelberghs from BC Architects & Studies says: ‘Today, a lot is being built without consideration for the environmental impact of building materials. Take concrete, the Rolls Royce of building material which you can use to build huge arch spans. But if you use concrete to build a wall which carries one floor, that’s a waste of raw materials.’

His colleague architect Ken De Cooman notices a shift in how architects handle materials: ‘We notice a mentality shift between the younger generations and the more experienced people. We’re somewhere on the breaking point. When we studied architecture in the early 2000s, we still talked about Architecture with a capital A. No one really thought about the environmental impact of the construction sector. That’s certainly different now.’ 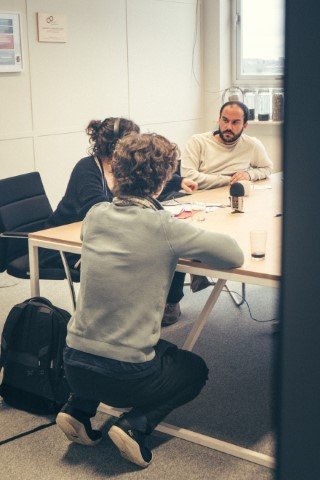 "When we studied architecture in the early 2000s, we still talked about Architecture with a capital A. No one really thought about the environmental impact of the construction sector. That’s certainly different now."

Tom Rosseel from energy distribution firm Fluvius also notices a difference between the young recruits and the seasoned employees: ‘In all honesty, there’s a lot of young colleagues who look differently at our circular project. It seems to be a generation thing. A group was set up recently to give second hand stuff a second life within the company. For young people at all levels - be it engineers, accountants, or secretaries - it’s something they keep in mind at least partly. It’s good that we’re aware of this as a business.’ 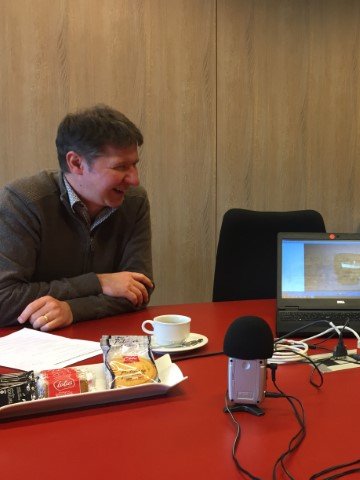 Getting the generations before 1995 into the circular story is a challenge, but there are already roots. Neos, a Flemish ‘youth movement for seniors’, set up a project called ‘Circulair@NEOS’ in which seniors apply the skills and knowledge they already have. Director Martin De Loose shares more: ‘We noticed that there’s already a lot going on in the field, you just have to grab hold of that, and give it an extra push. One of our management volunteers recycles old corks together with people who have a mental disability. We published this story in our magazine. If you take your time, then, to look at what our elderly people had done in the past,’ De Loose continues, ‘you will find that they create a link with their childhoods: they never used to go shopping with plastic bags, they used cotton diapers, sharing large appliances with the neighbours was commonplace. Everything that happens in circular economy today carries some philosophy from the past.’

It’s not always simple to break through old habits, and people require strong incentives to change their behaviour, such as financial stimuli, new legislation, or strict checks. Art Lobs experienced as much. He’s managing director at soil company Verhoeve Milieu & Water, and led a project around reusing wastewater in gardening called ZuNuRec. ‘Extracting nutritional material from wastewater isn’t very interesting economically, we discovered that now. Unless the realisation grows that no more nutrients may end up in surface water, and the government will do more checks and write more fines, farmers will probably continue to illegally discharge their wastewater.’ Clear regulations is an important guideline here, Lobs states. ‘Well, from which point is something harmful? You need crop protection products, how much of that may end up in the surrounding environment? How much gas may end up in our air, without it being harmful? That will only become clear as soon as the government takes a stance about this.’

A different problem: new techniques with big potential for circular economy can meet resistance in society. That’s the case for example with the groundbreaking work from Glimps about new organic materials using microorganisms. Co-founder Winnie Poncelet notes: ‘People don’t know much about the role of microorganisms, which are mostly associated with news stories about salmonella infections or mould on rotten food. This has us face a huge marketing challenge, because the net-contribution of microorganisms in our society is massive. Without microorganisms, we’d have nothing; we’d be ill all the time and there would be no food. But the disgust for microorganisms is strongly embedded in our culture, and has so many stakeholders - like hospitals or food manufacturers - at the same time, which makes the task of changing that perception bigger than we can take on.’ The necessary shift in public opinion to turn the tide is a slow process, which needs tinkering with from many sides at the same time.

The necessary shift in public opinion to turn the tide is a slow process, which needs tinkering with from many sides at the same time.

Of course, procedures and existing regulation aren’t always compatible with circular economy. This is true for stale procedures that don’t line up well with new business models like product-service combinations. When plastic recycler Eco-Oh! wanted to offer sofas as a service, the company found that local government procedures for purchasing infrastructure were designed for a traditional purchase model. Stefan Wauters adds: ‘There was also a lack of clarity among public servants from which amounts they’d have to follow stricter procedures, and the entire city council has to decide and not just one body. Different public servants report different regulations.’ Entering circular economy in historically manifested systems takes time.

Different innovators in Flanders operate with their eyes pointed at tomorrow. Implementing sustainable strategies in your product can provide you with a long term edge as opposed to your competitor. Some changes, however, just require time.

Durabrik’s Toontjeshuizen - houses customised to people with a disability in order to facilitate independent living - are built in a circular and modular way. Steven Vanden Brande: ‘A building only lasts for a certain amount of time, until it needs renovations. We can’t ask our residents to move for a year during the renovation works. That’s not circular thinking, we’re not heading in the right direction that way. So then we asked ourselves: how do we build so that we can easily renovate later on? We’re making some investments today that we wouldn’t necessarily do for a regular house because we wouldn’t be competitive. With Toontjeshuizen we’re trying to build as cheaply as possible, but within forty years.’

At Papillon as well, long term thinking is rooted in their way of working. Their solution for the complexity of energy poverty consists of a rental system for household appliances. During their pilot project, they installed 100 appliances in people’s homes with a service contract of ten years. This is how long their experiment will take. Because of the long term of the project, there are long term impulses as well. Bosch, the manufacturer, will take back the appliances after ten years and has to find a good use for them. Stefan Goemaere says: ‘At Bosch, they told us that we’ve offered them a way to experiment with circular economy on a silver platter. They’re entering a long-term commitment to do something with it.’ This just goes to show how pilot projects can plant seeds to long-term environmental gain.

Articles in this series